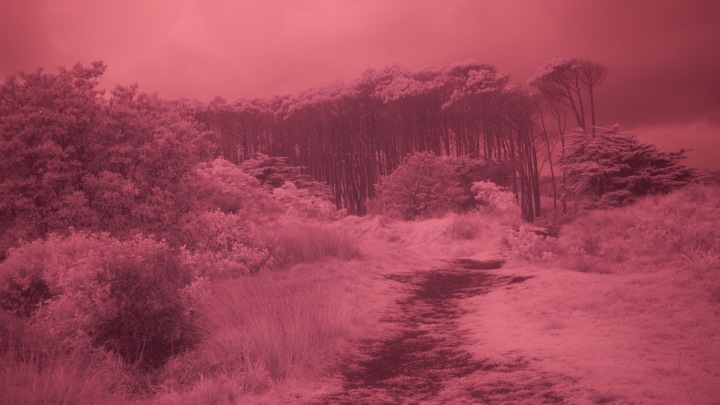 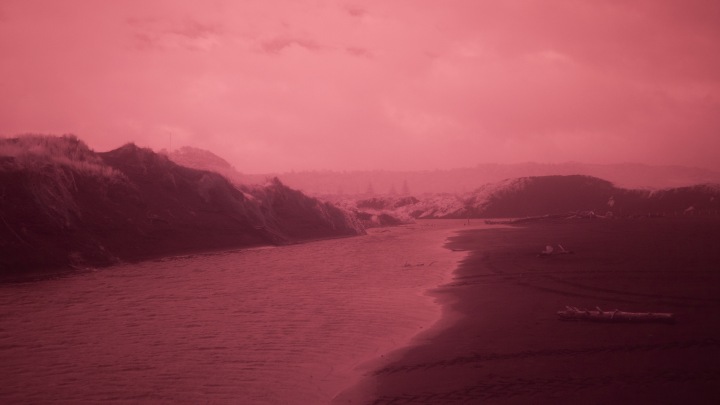 A glimpse of some new works in progress can be seen here as part of the POSTmatter x fig-2 exhibition.

As of August 1, 2015, fffff.at will remain online as an archive but will no longer be updated.

A lot of what I want to say about FAT closing has already been said by Magnus (and Peter, Frank & Rop, Geraldine, Rasmus and many others). The web has changed a lot in the last 8 years (so have we). Our adversaries have grown powerful and our methods outdated. Convenience is a hell of a drug, and we are in over our heads. The futch is going to be amazing! But for now it’s simply time for something new.

I have huge respect for all those involved in the group, and very fond memories of the laughs we’ve had and things we’ve built (hopefully some of this will continue under different banners). The excitement of F.A.T. closing is in seeing what its former members will do next.

(The views expressed here are only mine, and do not reflect a collective view of the group). 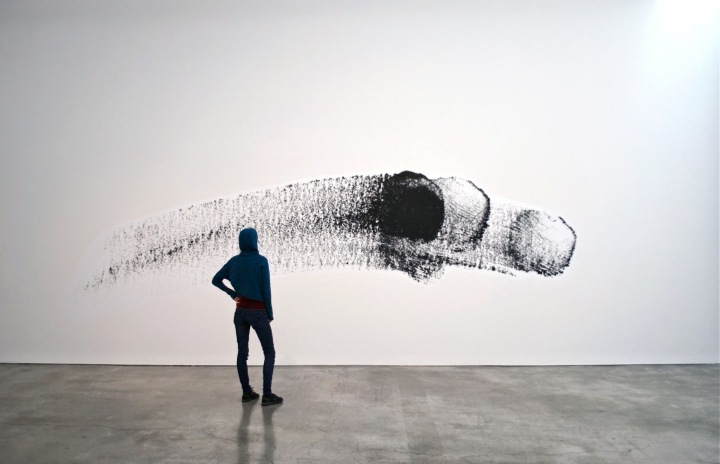 Roth’s work is from his series entitled Multi-Touch Paintings (2012-2014)—enlarged prints of various fingerprint patterns, which are derived from routine tasks performed upon a touch-screen device. The image selected for this exhibition, Next, Next, Next (2014) speaks directly to the inundation of visual information that requires the simplest and most general of movements in order to encourage prolonged viewing of new content.

Oversized and at eye-level, the fingerprint pattern of Next, Next, Next draws attention to an emergent language of both communication and gestural movements that are unique to the 21st century. Exploring how popular forms of passive, mundane engagement operate within contemporary networked culture, Roth’s Multi-Touch Paintings make visual the conflation of obscure personal information (epitomized by the fingerprint) and idle activity. Such gestures are are often made in successive, yet seemingly inconsequential ways that are nonetheless valuable elsewhere—whether as an unwitting contribution to page views or to a personal data profile. Online “engagement” as Roth’s works so deftly remind us, are reduceable to a few casual taps or swipes of the finger, many of which are made because they seemingly have no consequence, yet offer some semblance of connection or engagement.

Recognizing that the rapid exchange of information on the web is a new historical experience, Roth responds to this contemporary media climate by generating a body of work that is intended to be understood rapidly, if also at varying levels of depth. Intended to be experienced in at least three temporalities (online, in a gallery, and within a historical context), Roth’s oeuvre is reflects the signposts of a moment that demands multiplicity in order to have social and historical relevance. 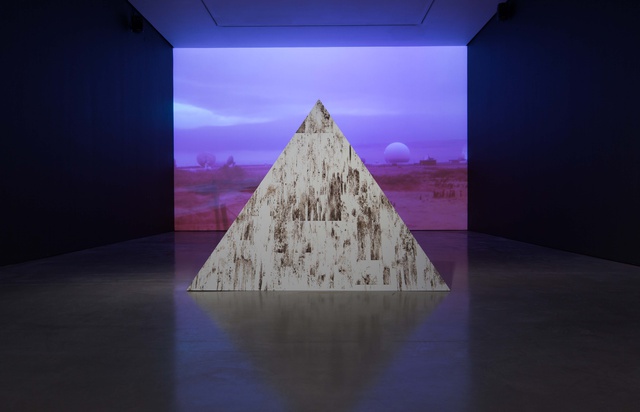 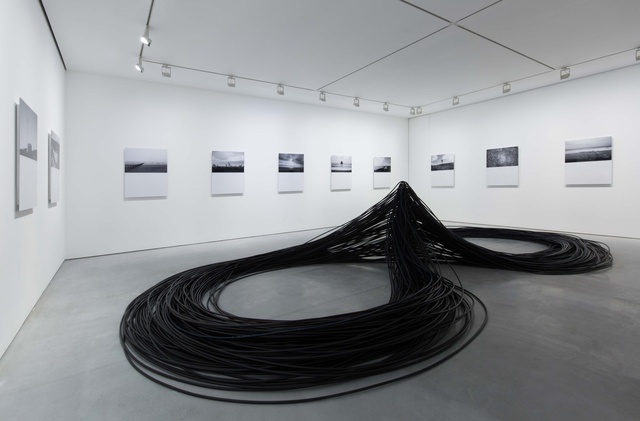 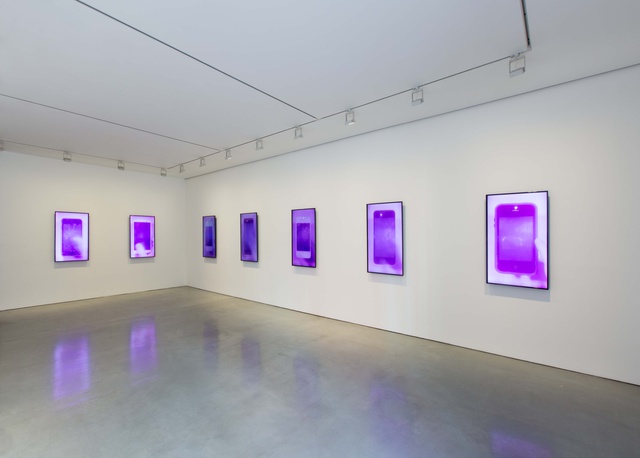 More information about Voices Over the Horizon here. 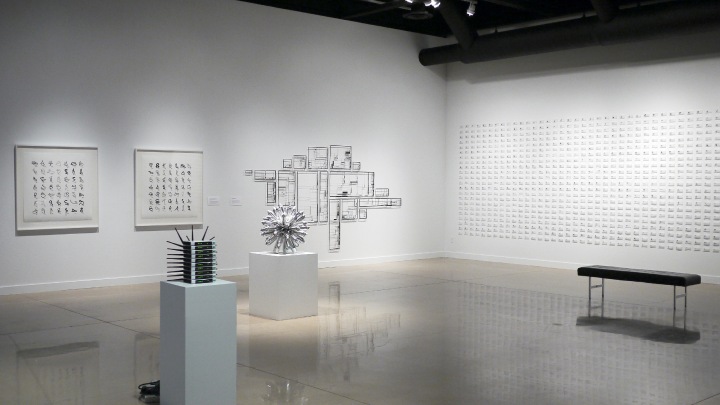 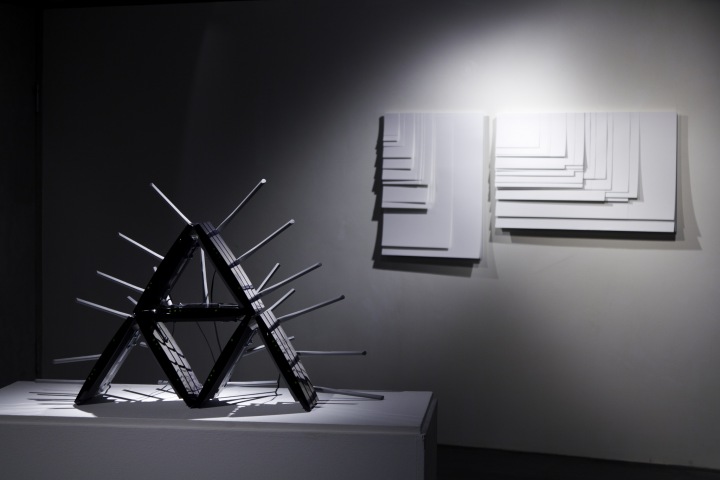 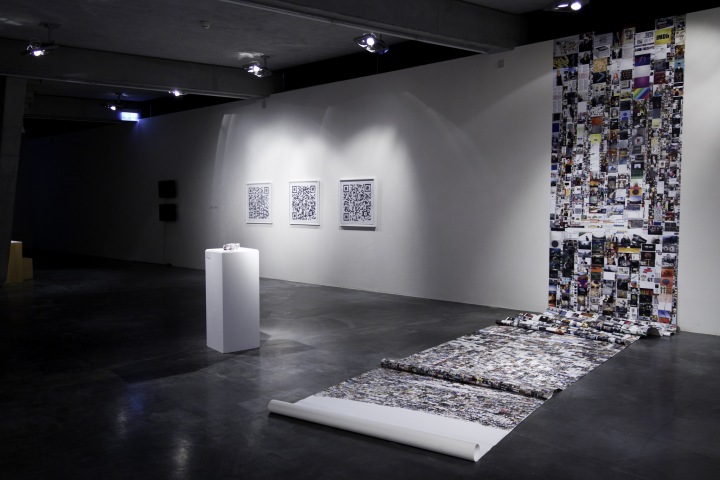 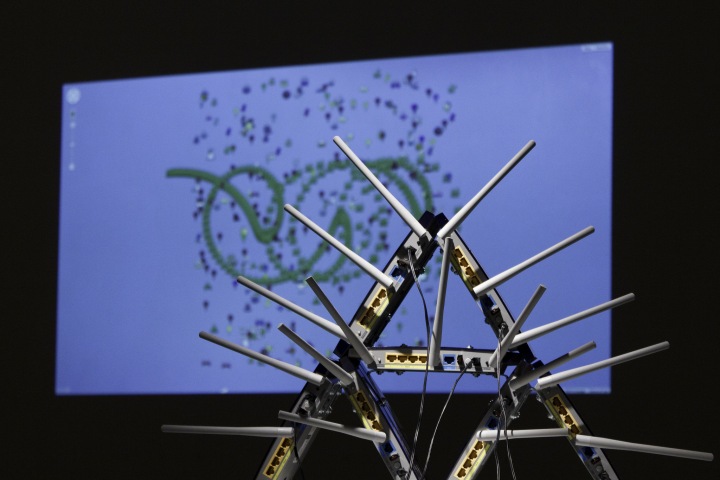 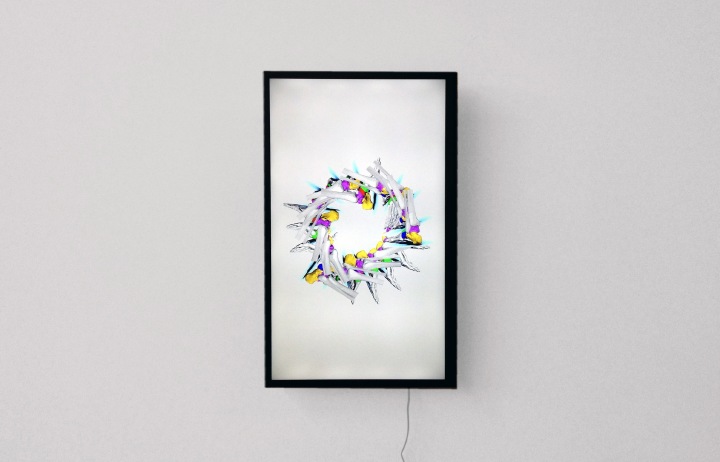 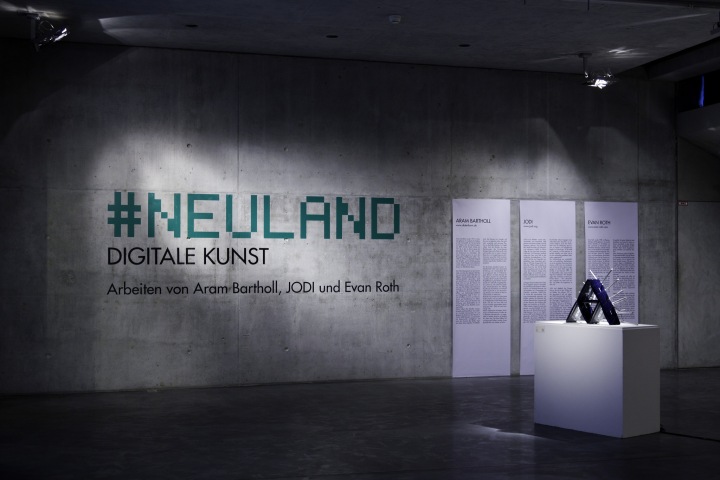 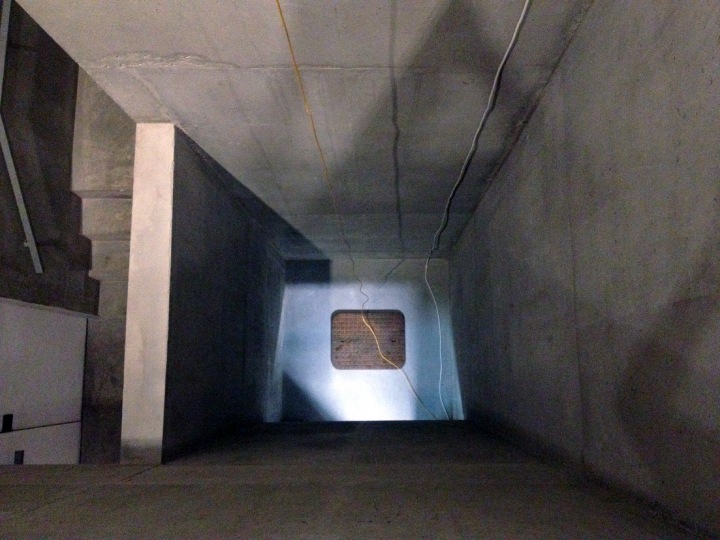 Voices over the Horizon is on view through April 11th at Carroll / Fletcher in London.

Our mobile touchscreens are perhaps our most intimate connection to the Internet, rarely leaving our sides. Here, video recordings show everyday people performing everyday tasks on their mobile devices. Shot with a full-spectrum infrared and ultraviolet camera built by the Cleveland Paranormal Society to document disembodied human energy, pixels ordinarily visible to the human eye become invisible, and those signals normally invisible are made visible. In obscuring the digital interface, the new and unnatural movements we have adopted become all the more apparent. By contrast, the only illumination visible from the phones is the ordinarily invisible infrared beam, emitted from LEDs in the top section of the phone near the earpiece and used primarily for facial recognition. This illumination is controlled not by the user, but by the device, and displayed together these works prompt the question of who or what is controlling our gestures as well.

Voices over the Horizon is on view through April 11th at Carroll / Fletcher in London. 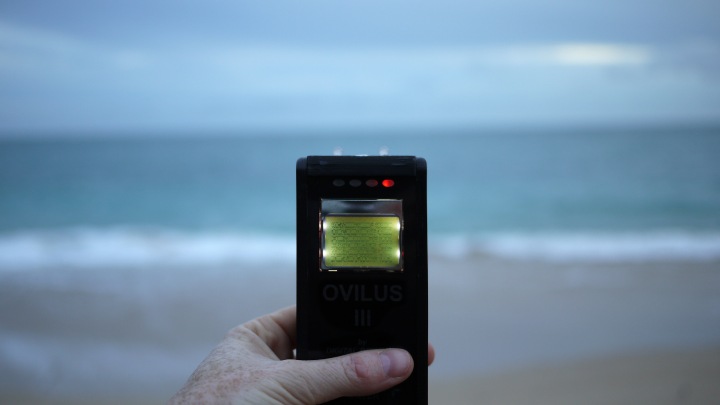 In Voices over the Horizon, Roth presents the findings of his paranormal investigations into the Internet. Using ghost-hunting technologies and rituals, Roth ventures into the Internet’s physical landscape to reconnect with a network changed by monetisation, centralisation and surveillance.

Often described as the search for disembodied human energy, ghost hunting for Roth becomes an apt way to describe our daily interactions with the Internet – a world seemingly invisible yet swarming all around us.

Like his 19th century counterparts whose urgent enquiries into the supernatural were often conducted on sites of assumed paranormal activity, Roth made a recent pilgrimage to Cornwall on the south-westerly tip of the UK, one of the world’s most important telecommunications hubs dating back to the very first trans-Atlantic telegraph cables laid there in 1870. Today, fibre-optic Internet cabling connecting the United States to Europe ascends from the depths of the Atlantic basin onto the Cornish coast carrying 25% of the world’s Internet traffic. Zigzagging and disappearing through several small beach towns, here the physical Internet meets a picturesque, untamed landscape, long steeped in tales of both communication technologies and the paranormal.

Voices Over the Horizon reveals loss and an unconventional search to seek out optimism and inspiration in an increasingly dark Internet landscape.” 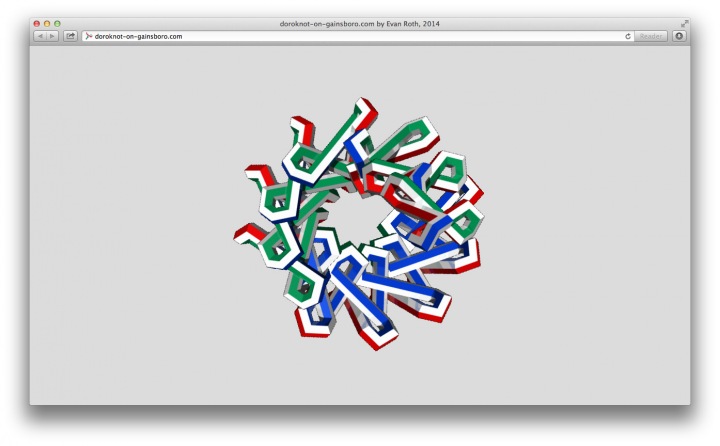 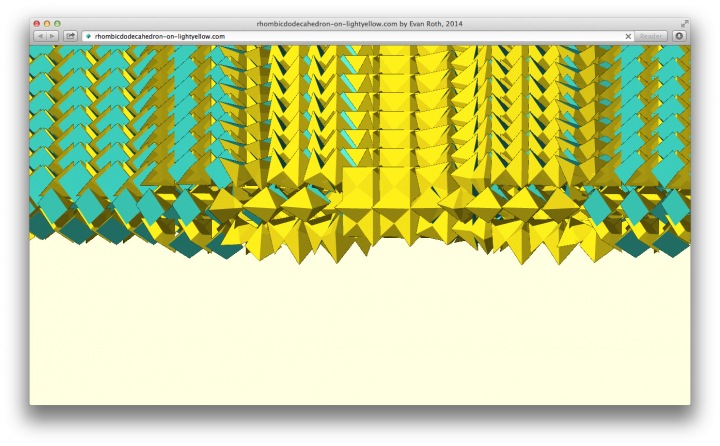 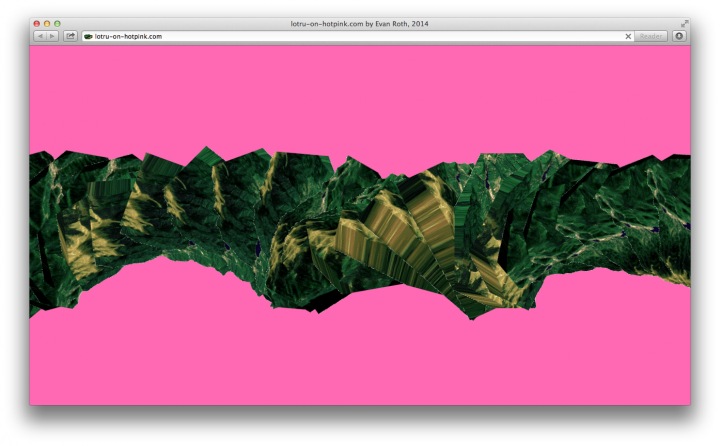 No Original Research is a new series of 11 art websites which are premiering today as part of the Snel Hest exhibition at the Alingsas Konsthallen (Sweden). For a complete list of pieces included in the series go to: http://no-original-research.com (more info here).

No Original Research is a series of art websites, each created from a single animation and audio file found on wikipedia.org. The title originates from one of Wikipedia’s core content policies, which states that all material must “cite reliable, published sources that directly support the material being presented”. The URL of each composition serves as its title, describing the repeated animation and the background color. The use of these gifs and HTML color names are a celebration of content driven by function and necessity. Compositions are created by copying a found animated gif file dozens of times and embedding them into a single HTML page. When the browser tries (and fails) to load all of the files simultaneously they become out of synch, creating an animation cycle that visualizes the latencies specific to the viewer. Each viewing is a unique experience dictated by the speed of the network, the browser used and the speed of the computer.

Information on the Wikipedia content used to create the pieces can be found by viewing the page source of the individual pieces.

Commissioned by the Alingsas Konsthallen.

My new studio (with studio mate Benjamin Gaulon) is now fully operational in Paris’s 11th arrondissement. Mathieu Tremblin (of Les Freres Ripoulain) christened the place with a new piece. Passersby can conduct a studio visit by going to my Offline Art node, which will be displaying unreleased pieces and works in progress. You can also visit the studio on the deep web at http://65zg2mx5bipqf2nn.onion/ (Tor browser required).

‘Previously in the City: BASIC’ by Mathieu Tremblin, 2014, Paris 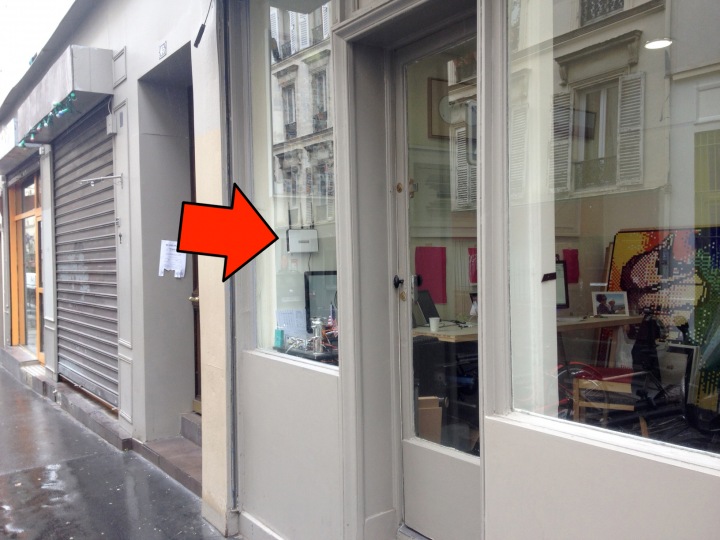 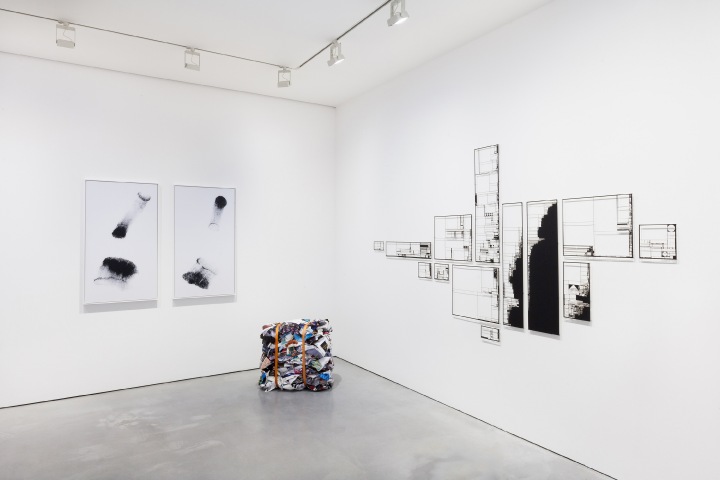 I’m excited to be a part of the Pencil / Line / Eraser exhibition at Carroll / Fletcher gallery in London, “a group show surveying recent works in expanded drawing which use paper and line as a point of departure.” From August 1 to September 13, 2014. 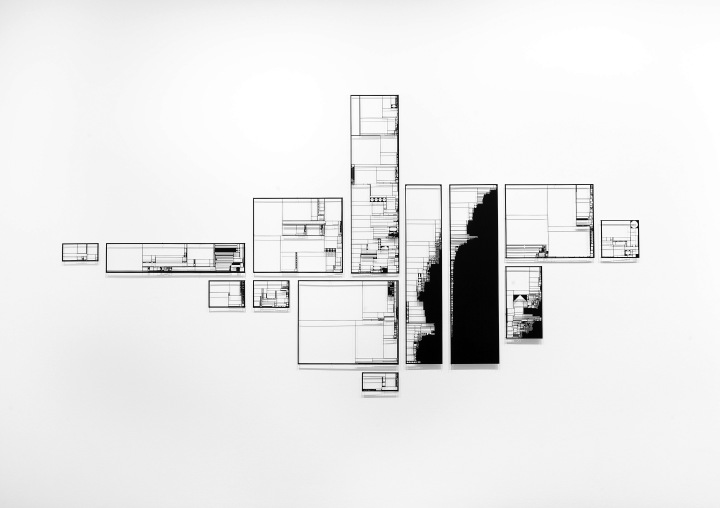 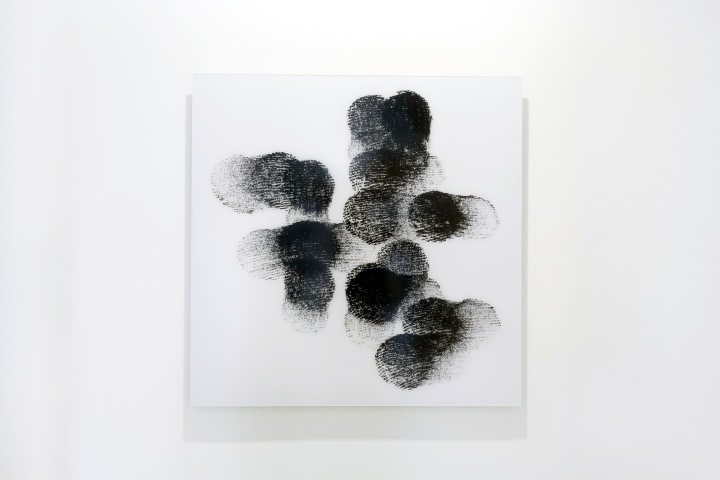